So exciting and refreshing! I think because of Covid-19, this year's atmosphere is a little different from previous years.

Hope that next year, we no longer need to worry about the Covid-19!

Because of a lot of requests from Adventurers, we are organizing a server merge in November. As a result, various changes have occurred.

This is November 2021 Monthly Game Report. 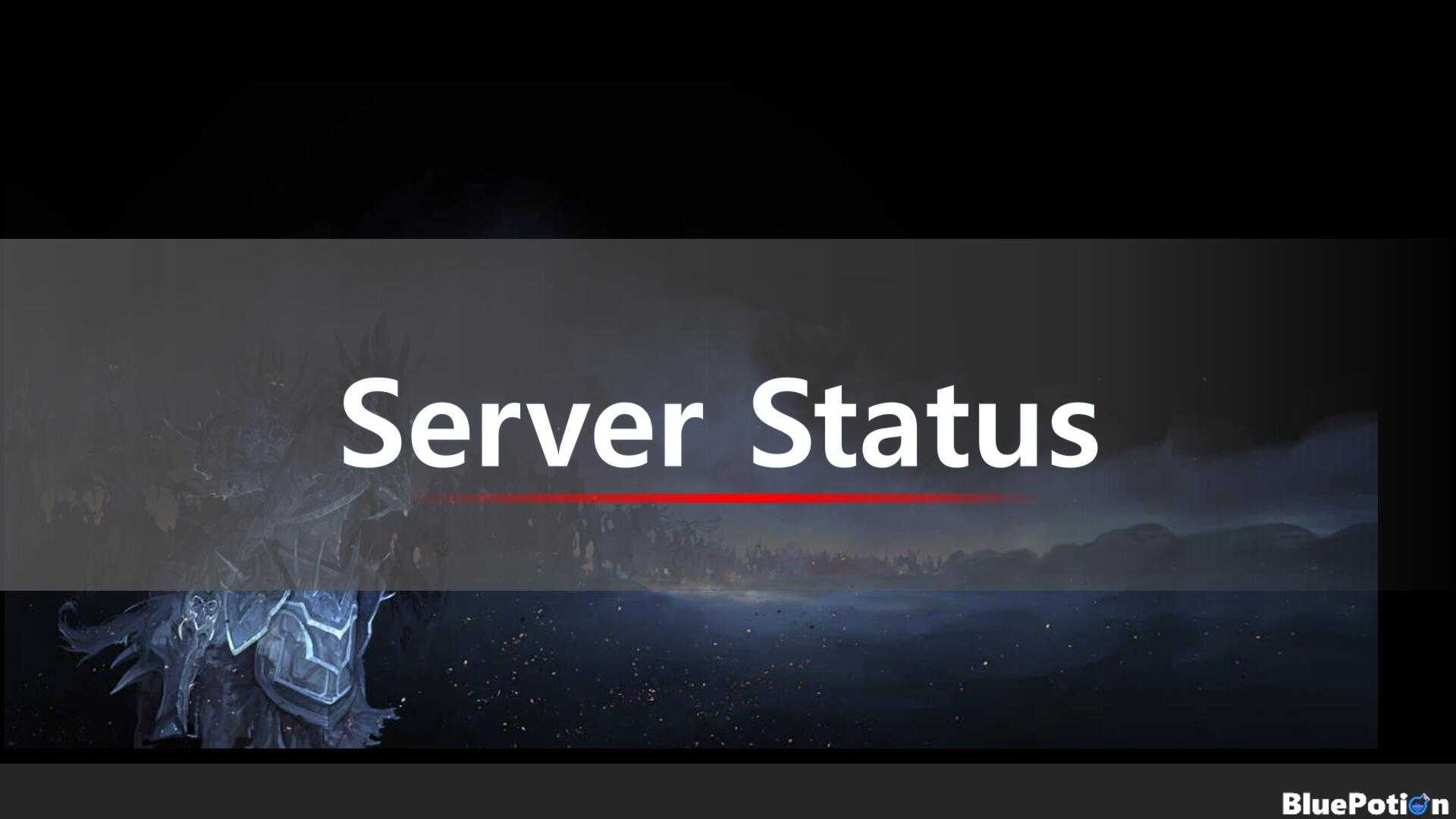 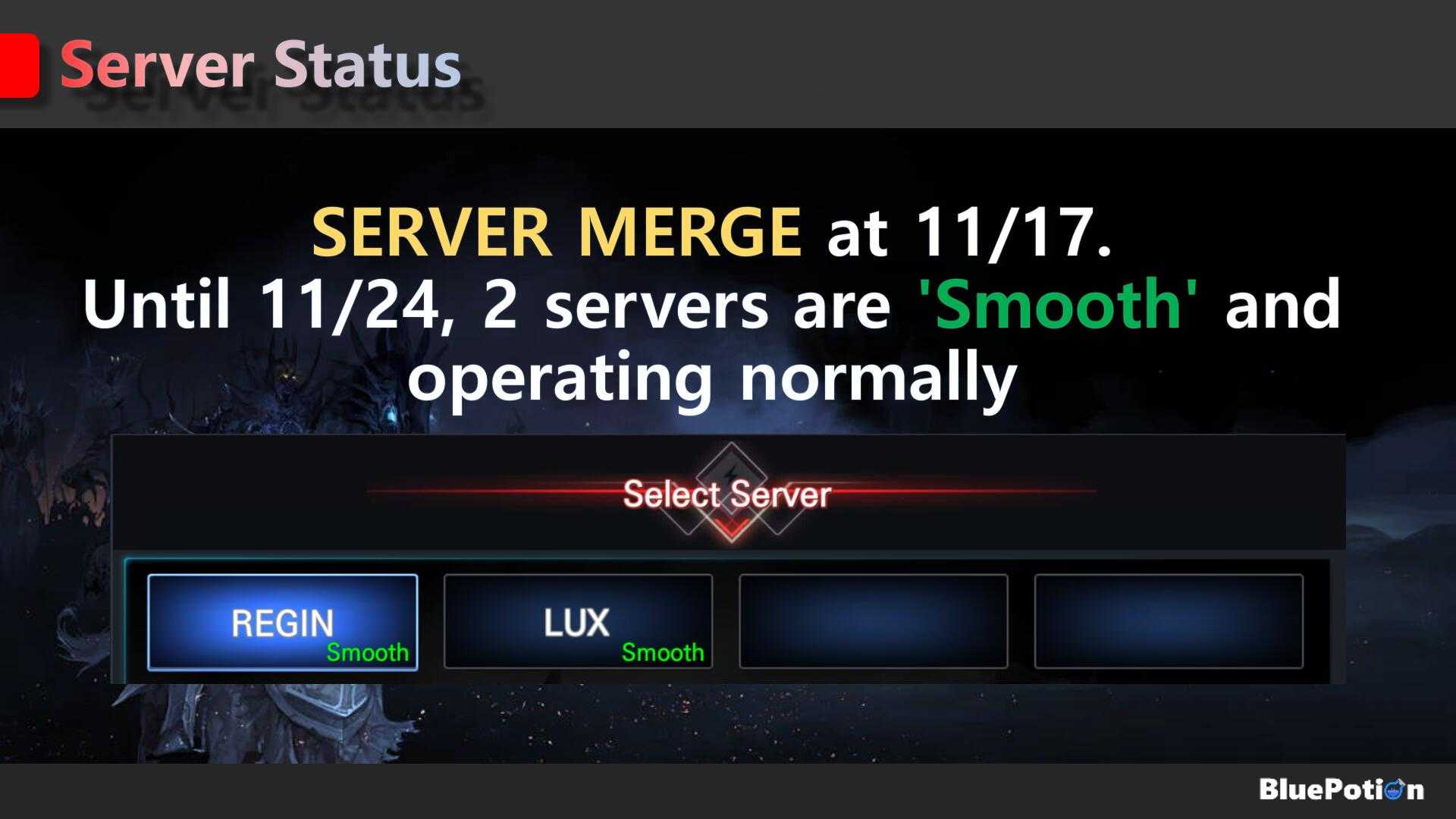 Here is the status of our current server in November 2021. 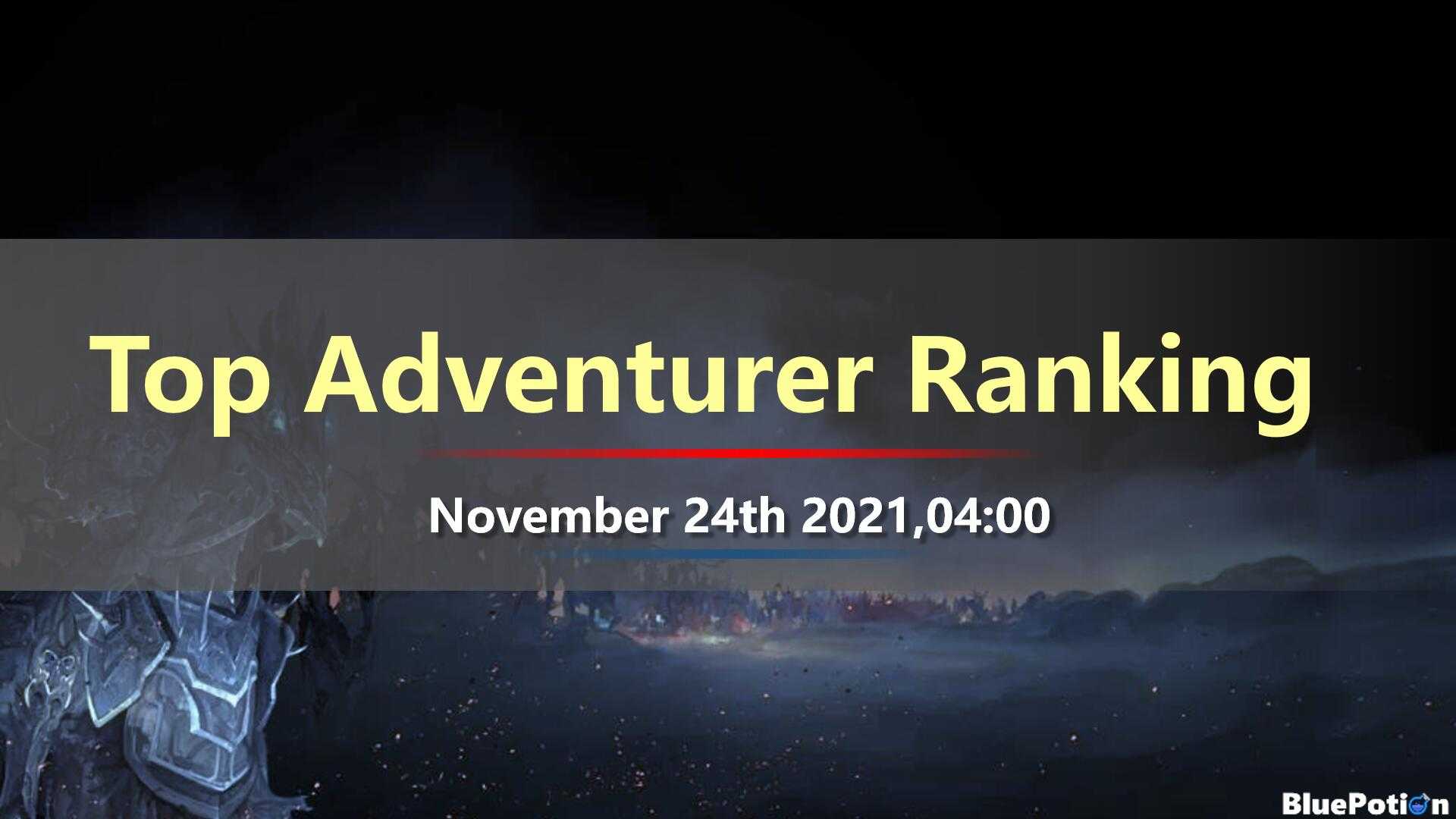 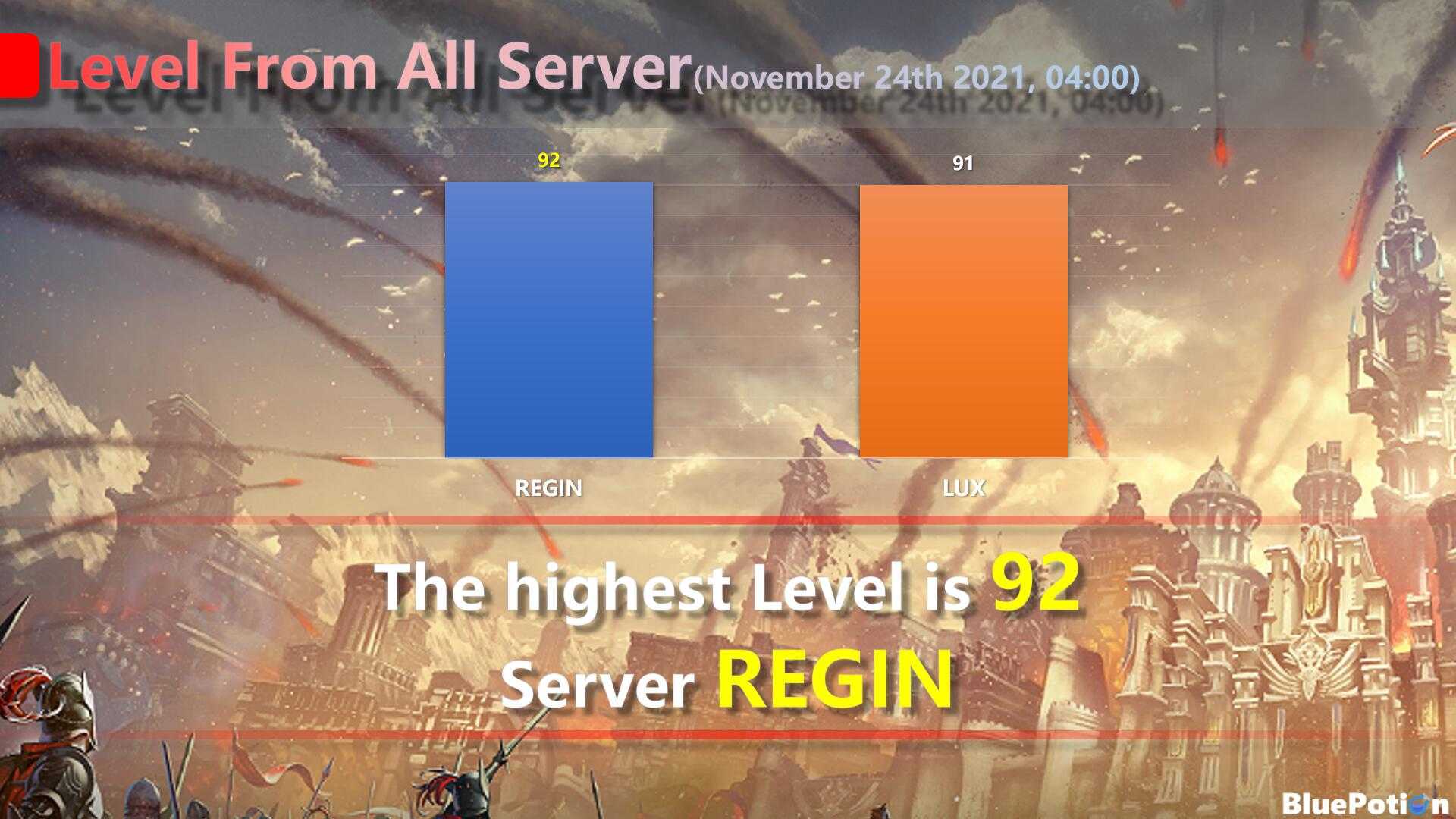 Today we will introduce the status of the Best Adventurer so far in November.

The highest level for this month is level 92, which was achieved on “REGIN" server. 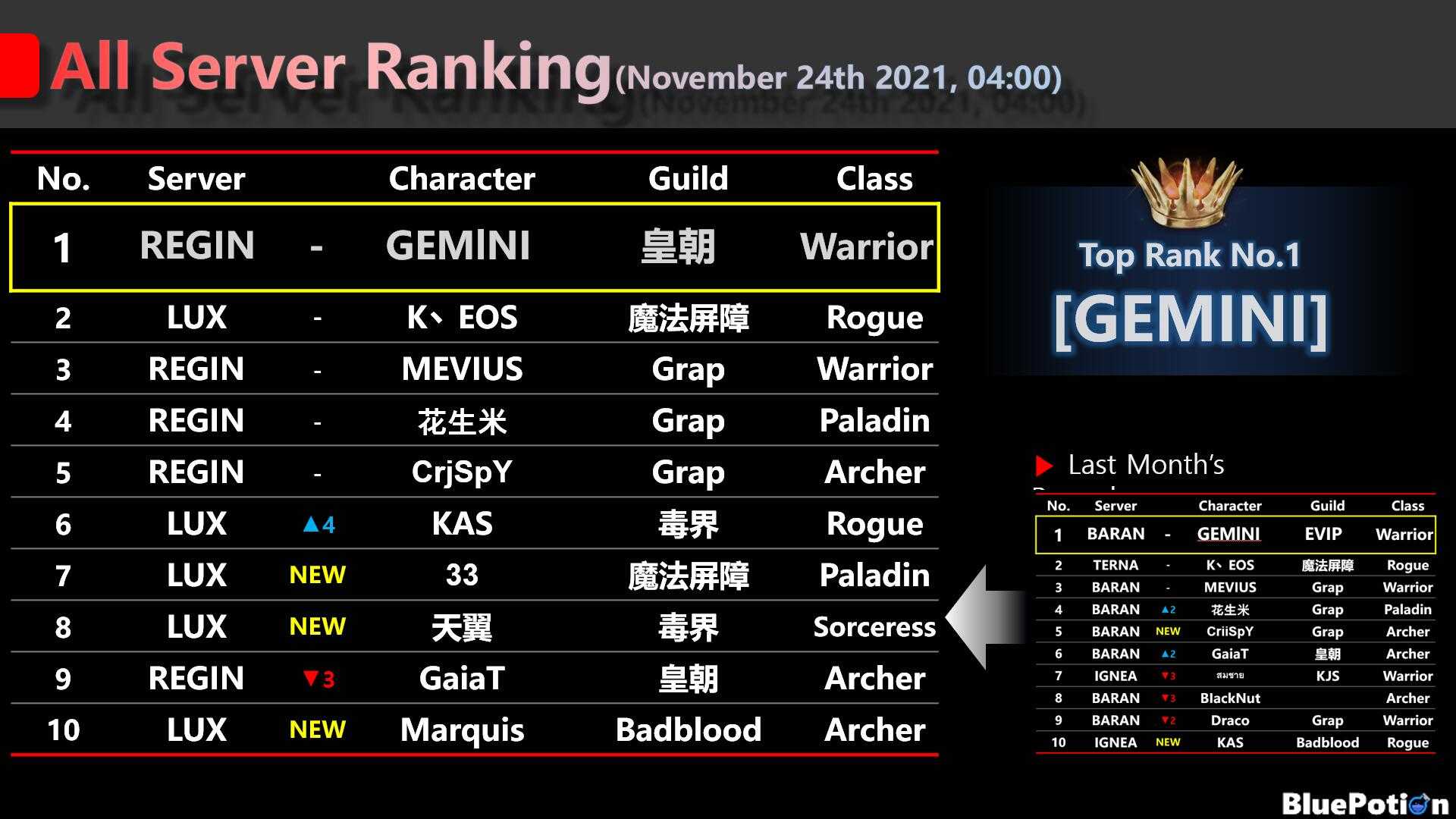 Next is Ranking from all Servers.The number one in terms of experience value is "GEMlNI" from “REGIN" server.

The second place is "K, EOS" also from “LUX" server,and the third place is "MEVIUS" from “REGIN" server.

Congratulations to become the Top 3 adventurers!Base on the 10 top players' ranks, the current distribution of each class is 40% Warriors, 30% Archers, 20% Rogues and 10% Paladins. 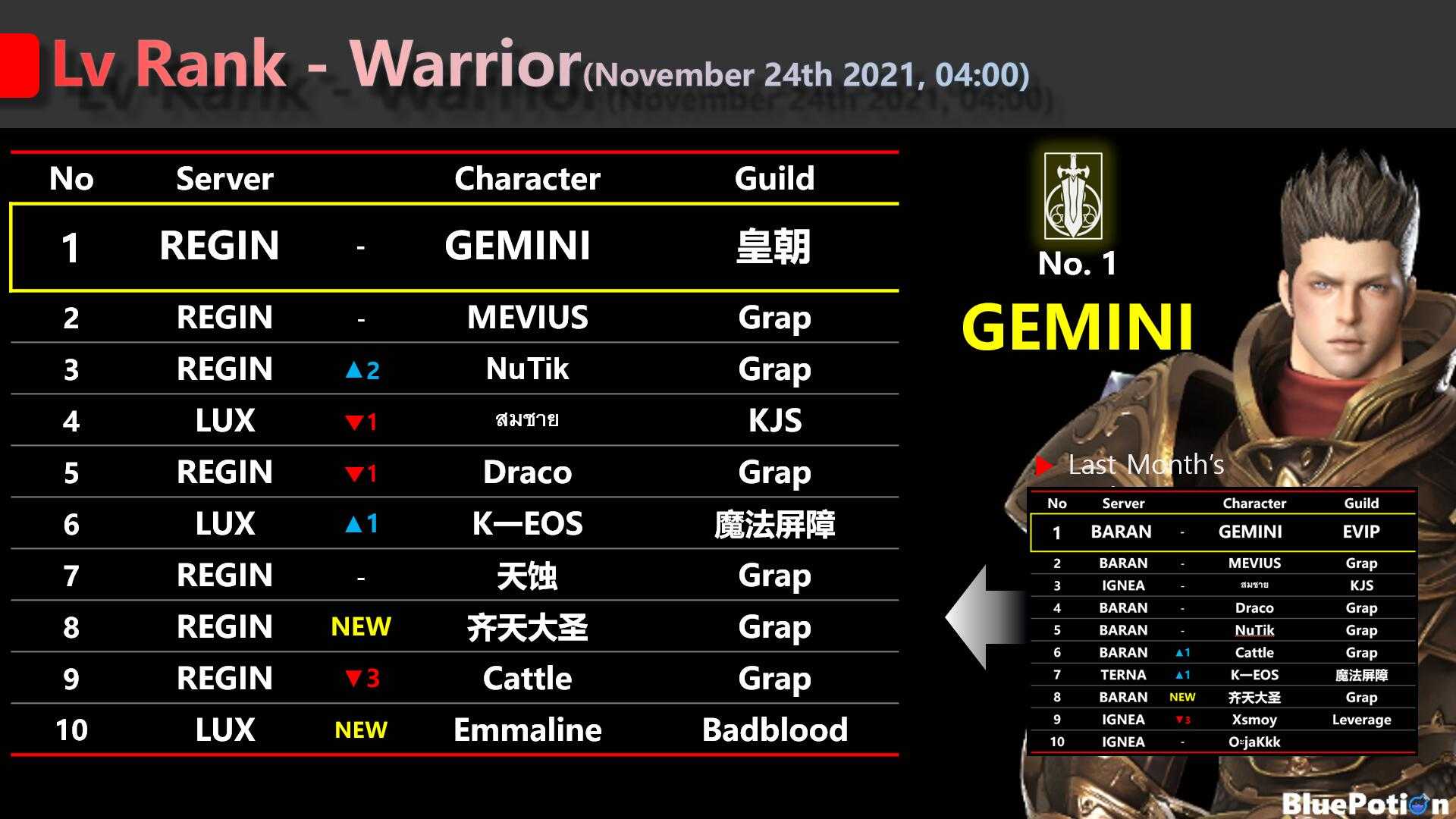 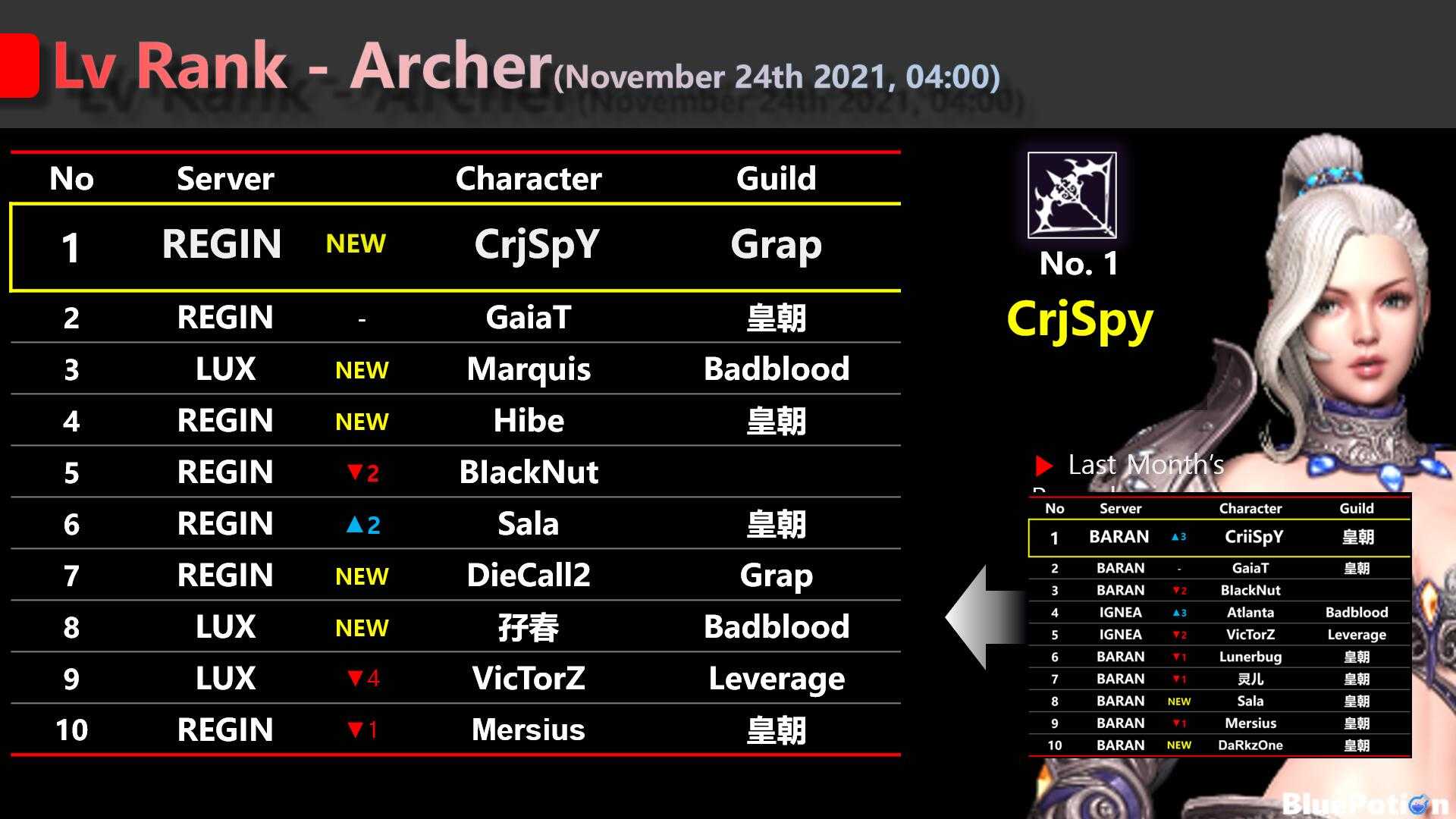 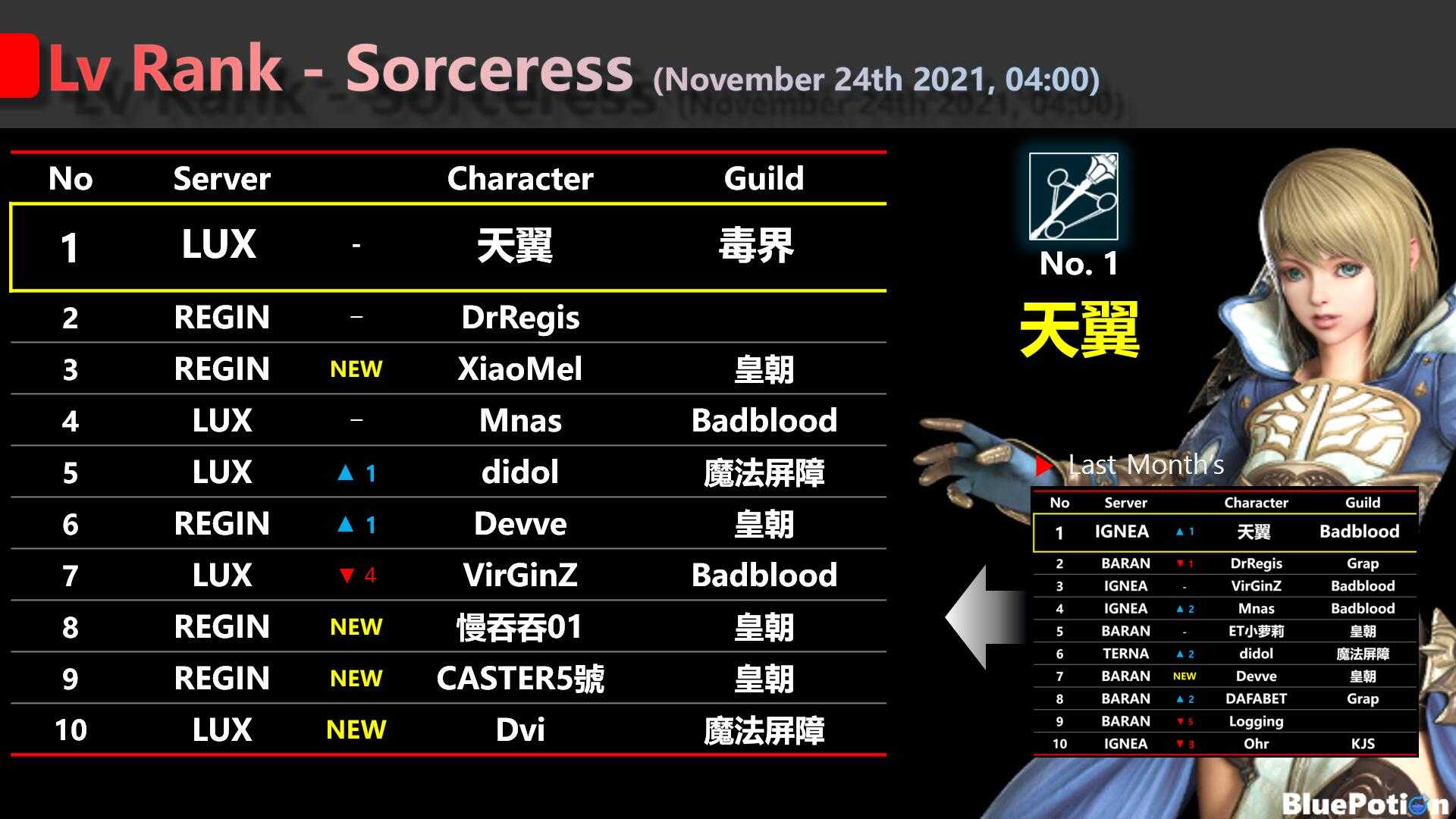 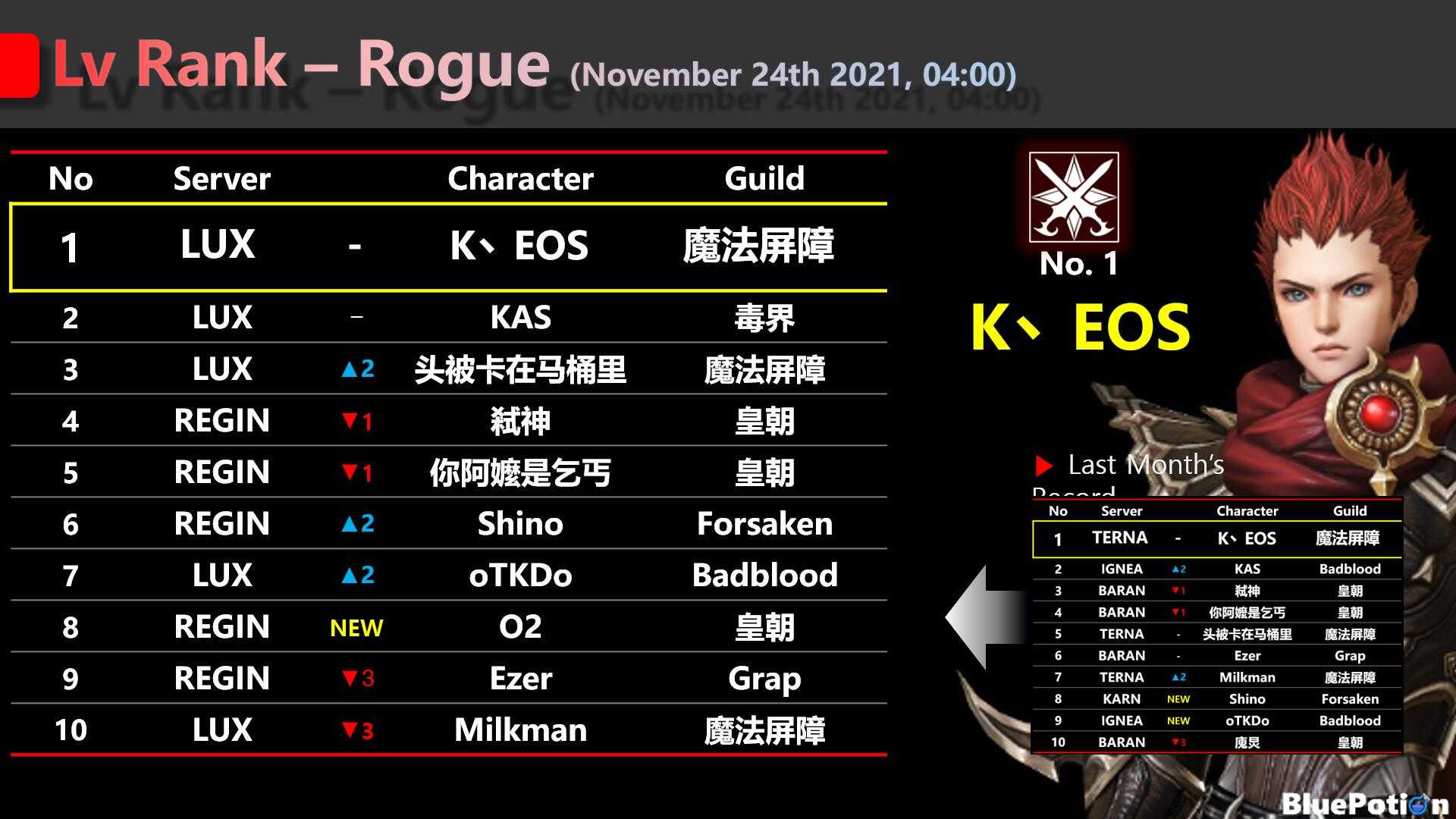 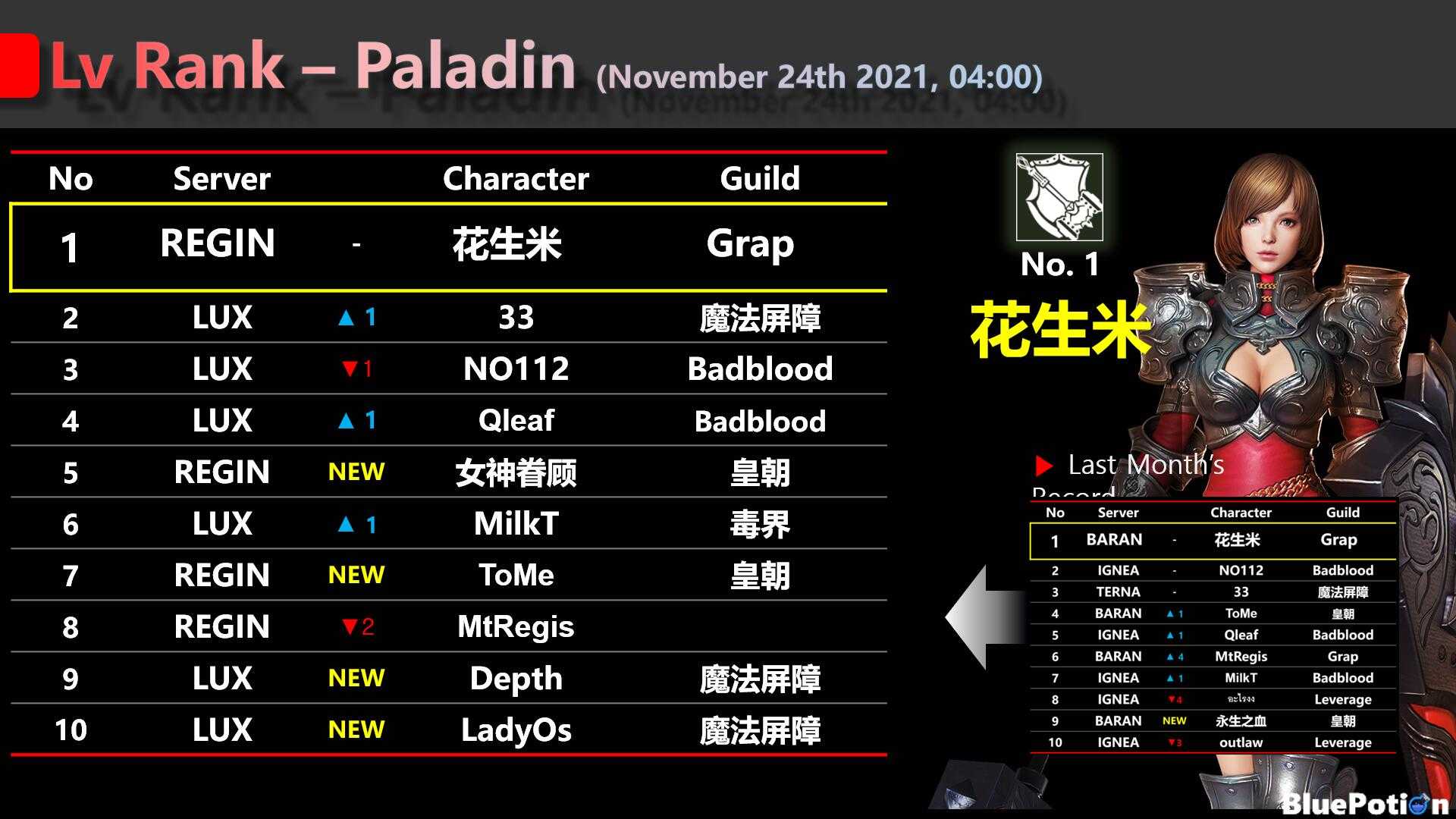 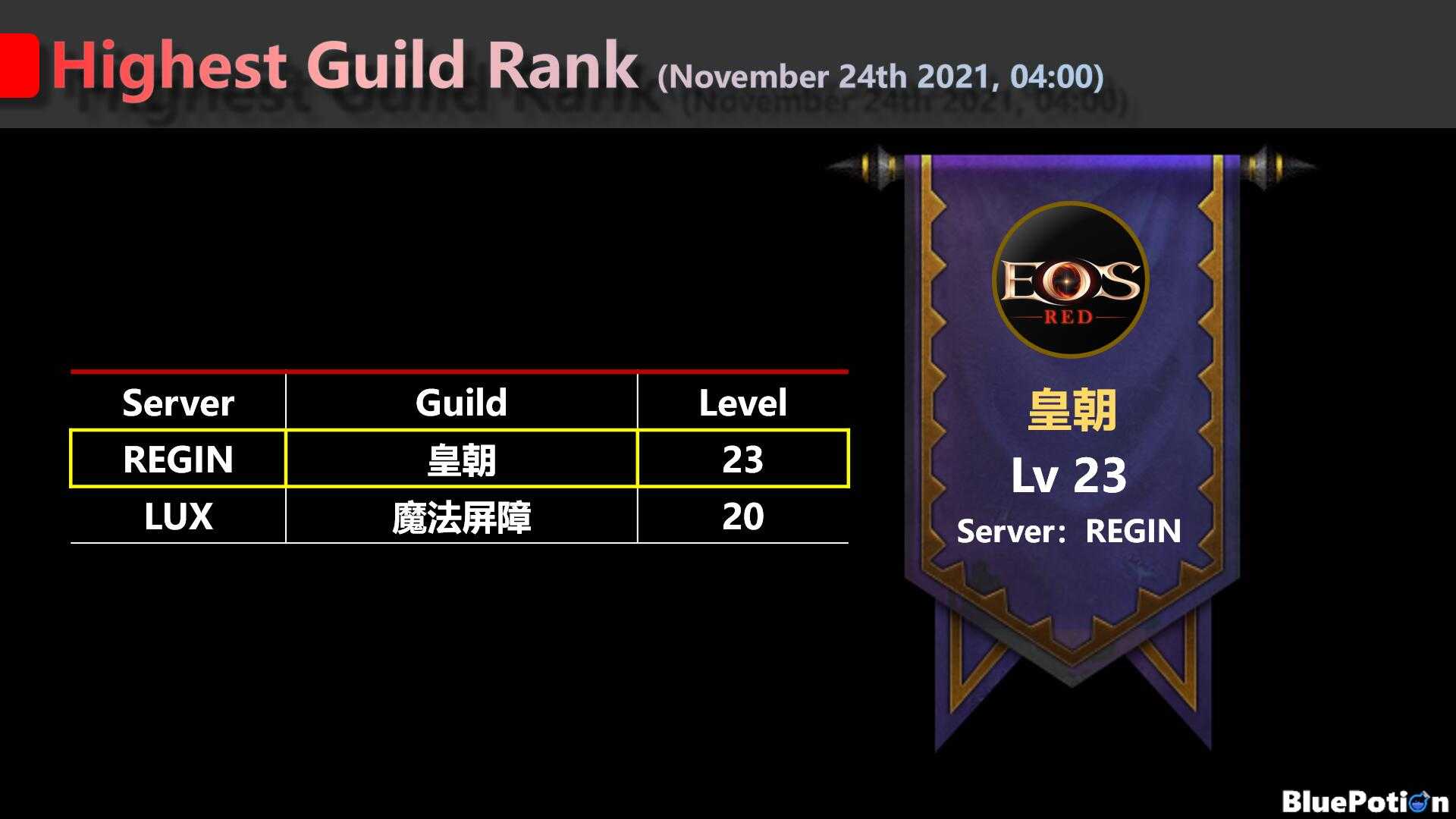 The "皇朝" guild of the “REGIN" server reaches level 23. 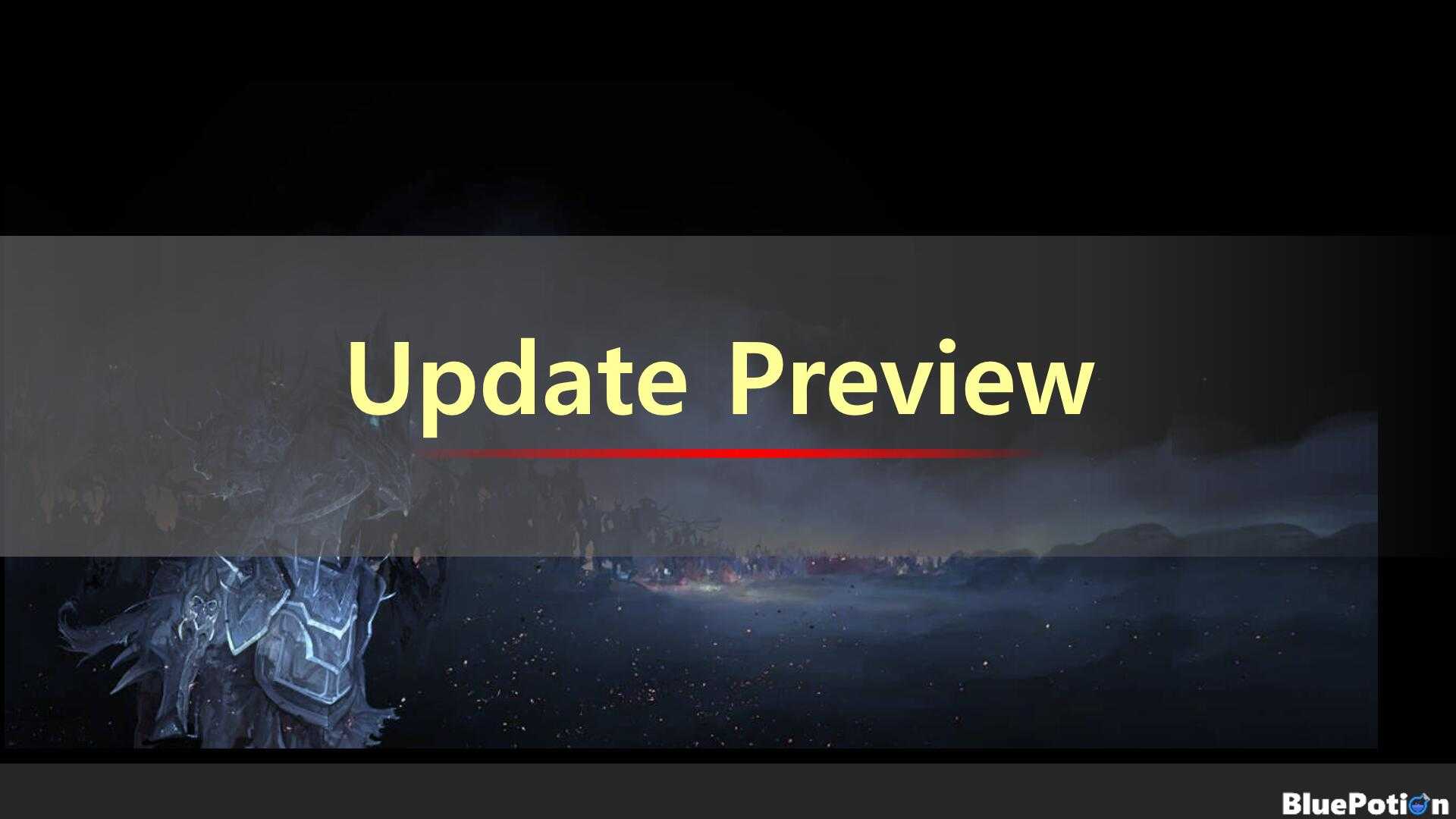 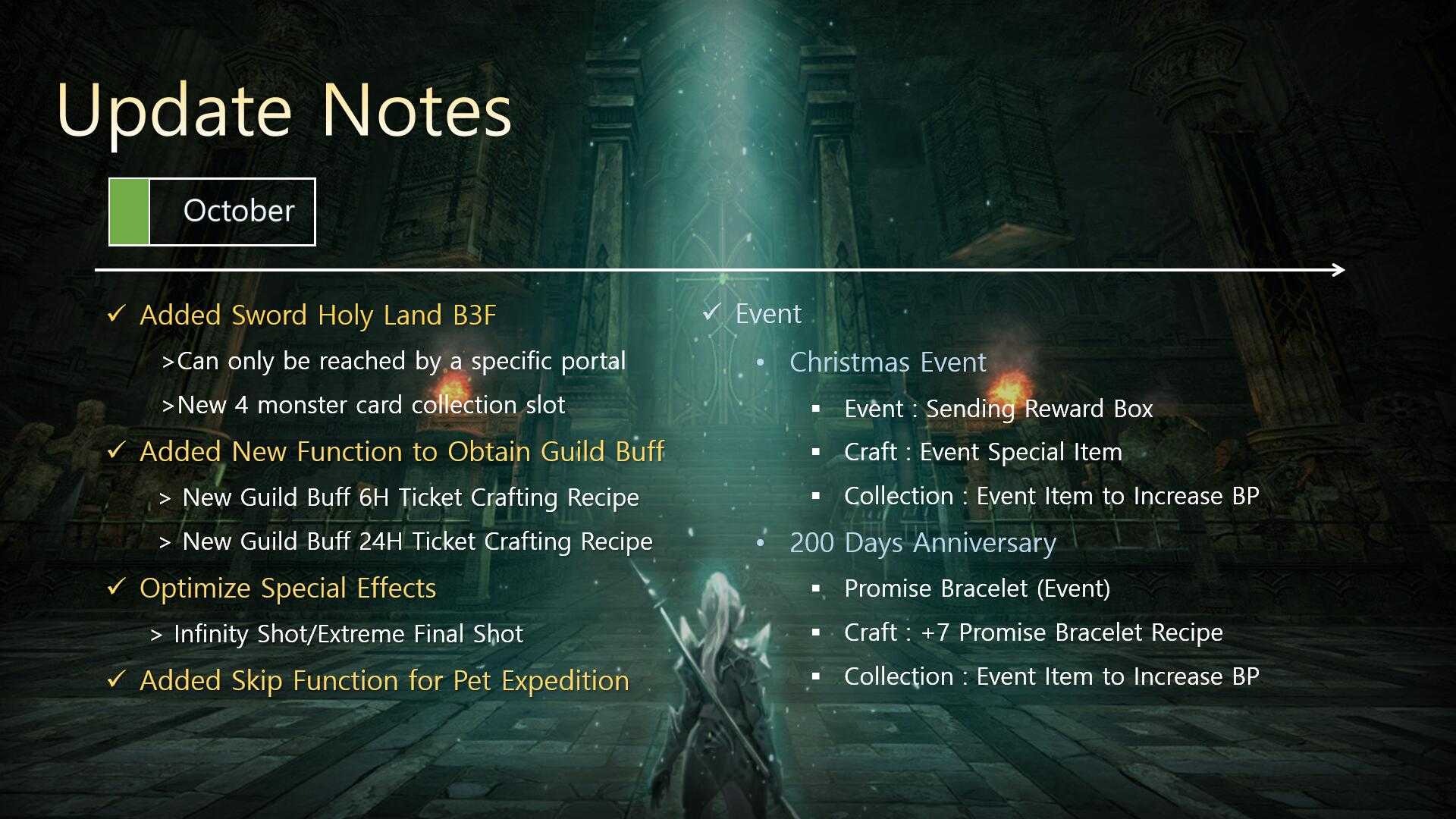 First of all, we will add Sword Holy Land B3F with this update.

We also improved the special effects of the "Infinity Shot" and "Extreme Final Shot" from archer skills to make them clearer.

In response to the request from Adventurer to have a skip function for Pet Expedition Departure Animation, a new <skip> function is added.

Now when the Animation screen appears before the expedition starts, just tap the screen to skip it, so it can improve the convenience of continuous pet expeditions.

To welcome the upcoming Christmas, a whole new Christmas Event will also be held. When you kill monsters in all areas in the EOS realm, you will get a snowball and you can gain various items from Snowball, so you can collect more to obtain more! Using snowflakes obtained from snowballs can be made to complete Event Collection /achievements and exchange special items from event NPC. 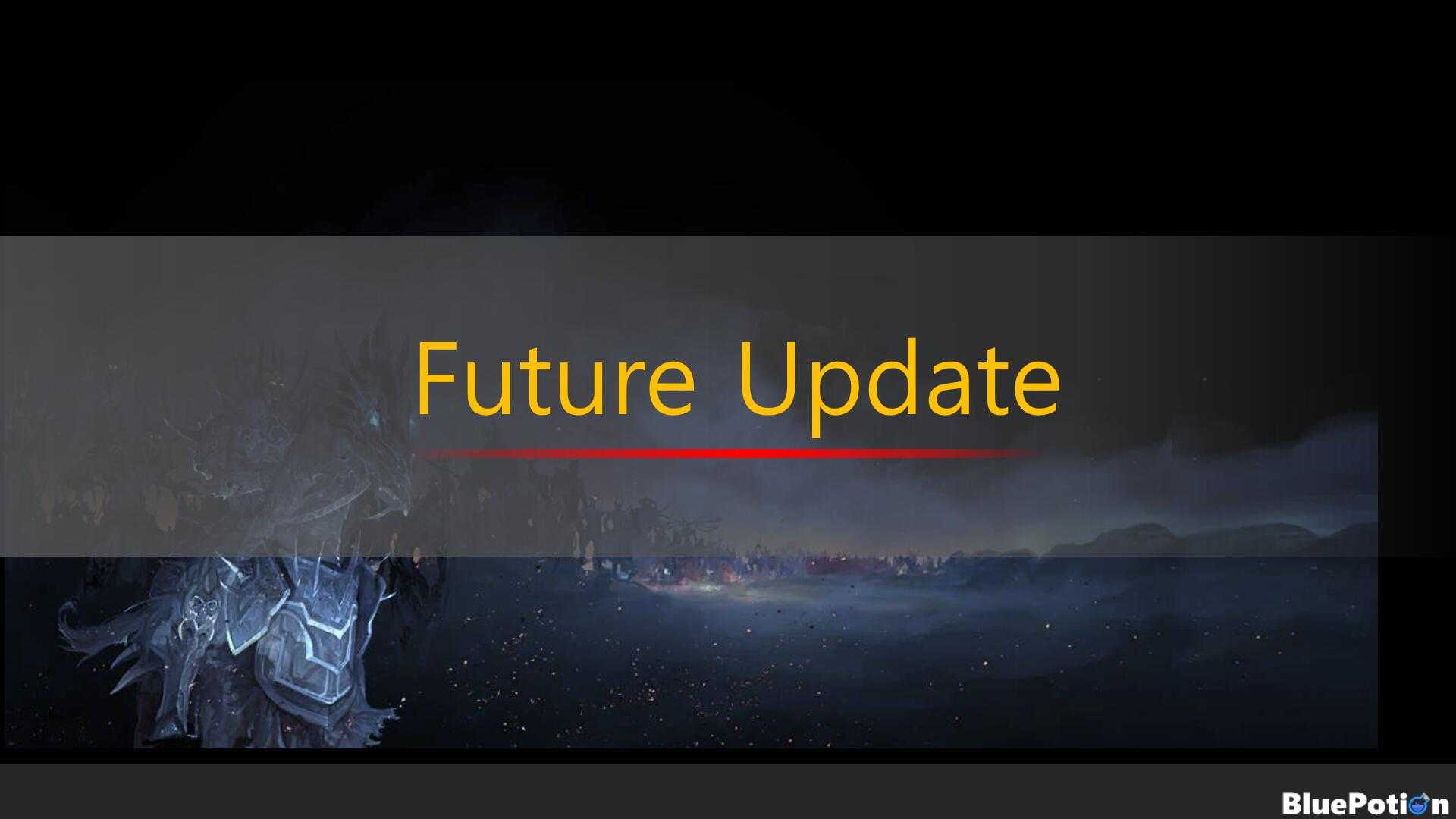 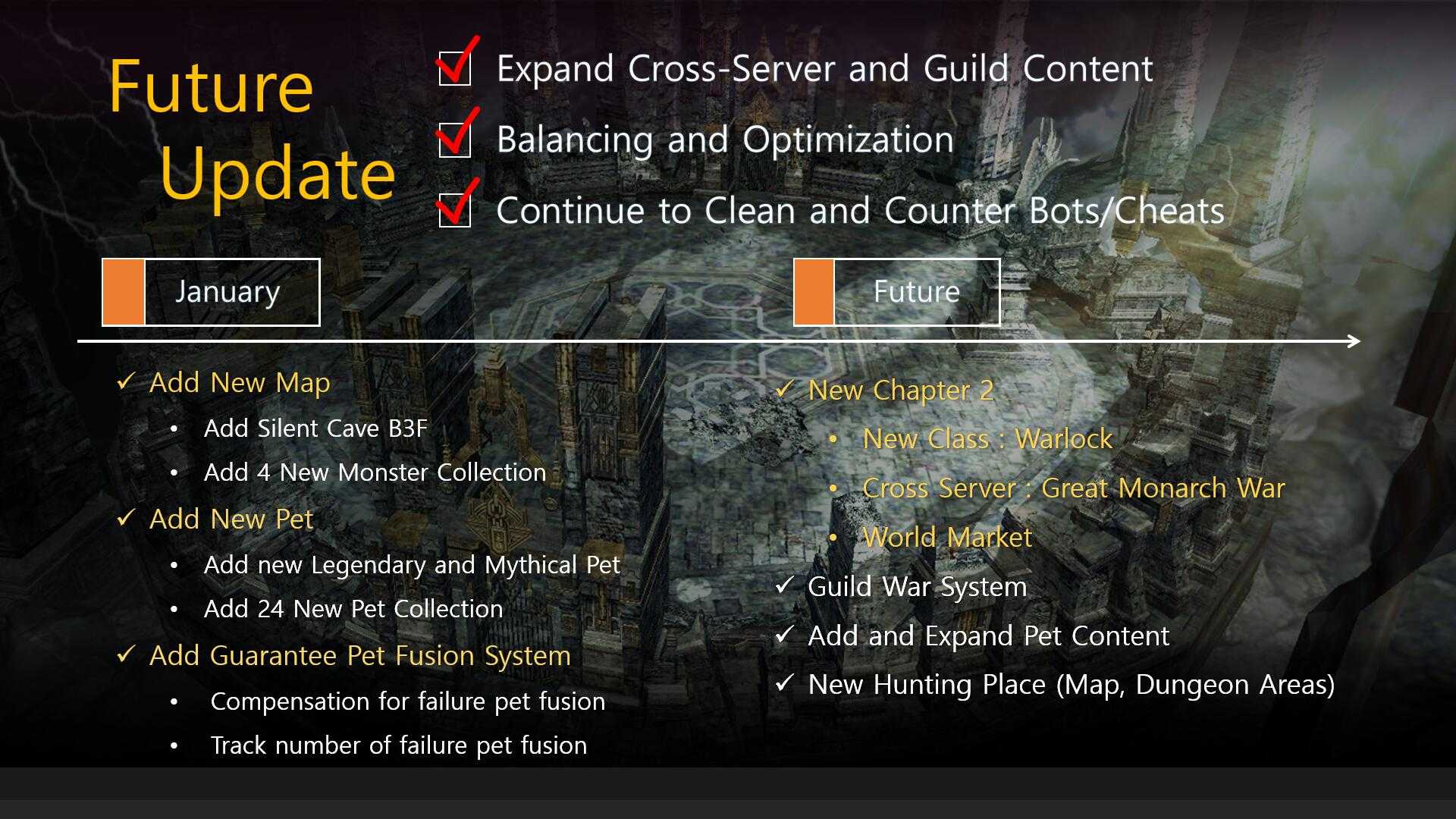 Silent Cave B3F can be only be entered from a portal at the Silent Cave  B2F layer and it also shares dungeon time with other floors and cannot be accessed from the Quick Portal Function, This area is currently occupied by the highest difficulty monsters (Lv 90~92).

In addition to ordinary monsters, there will also special Boss "Spirit Chancellor" for you to find out!

in this area, it is also possible to obtain items such as "Ancient God Soul", "Solidarity Soul", "Legend Soul Shard" and other legendary skill books and Equipment!

One new legendary pet and one mythical pet will also be added soon! So exciting!

While adding new pets, we will also add a new system for obtaining a guaranteed pet after pet fusion fails.

The Fusion record will be recorded and calculated from server lunch. We believe when the system is updated, A lot of adventurers can gain benefits from it!

The boss monsters that appear in the Polyce area will be updated. While improving the monster specifications, we will also increase the items obtained by killing the boss. Now when killing "Hovac", "Rosary", "Vicious Ghost", "Connie", and "Flynn" you have a chance to drop "Ancient God Soul"!

First of all, previously the update of the New Chapter 2  has planned for "Cross-server War: Great Monarch War" and "Cross-Server World Exchange", but our team still discuss whether it can reach the level required by the players, and thus has produced many problem.

But we also prepared a new class "Warlock" for the upcoming update. Because of the new class update, the New Chapter 2 will be delayed for further improvement.

Next, I will introduce the general content of "Warlock" and "Great Monarch War".

"Warlock" is a new class that uses basic physical attacks and various curse skills equipped with a magic sword and a staff.

Using a magic sword for dealing short-range damage and staff for casting various curse skills, with excellent ability to contain specific objects, attract objects or reduce healing effect, it is an indispensable existence in group battles.

Other information such as the image of "Warlock" is expected to be released next month.

Great Monarch War is an event among the servers, but only the Guild that occupying Ignea Castle can participate in this event.

The participating guild will determine the final winner through a 1vs1 elimination round.

Each round of matchmaking will not be made public before the start of the competition. The participating guild will allocate the accumulated taxes of the Cross-server World Exchange based on their results. 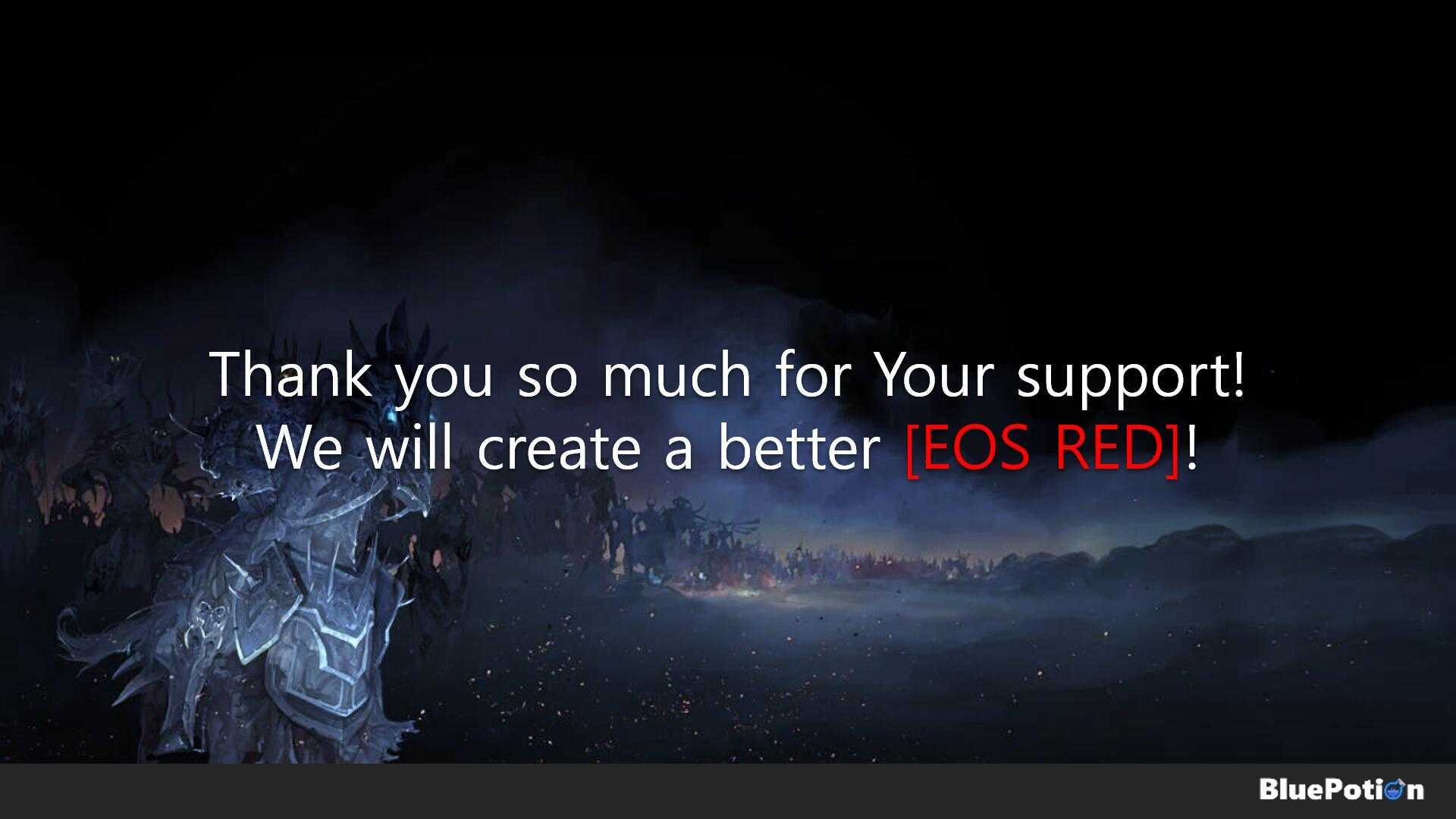 Hope in 2022 we can bring more exciting content that can make players satisfied with our beloved game.

Right now, the weather is getting colder, please take care of your health!I wish everyone good health. Thank you for playing with us! November 25, 2021